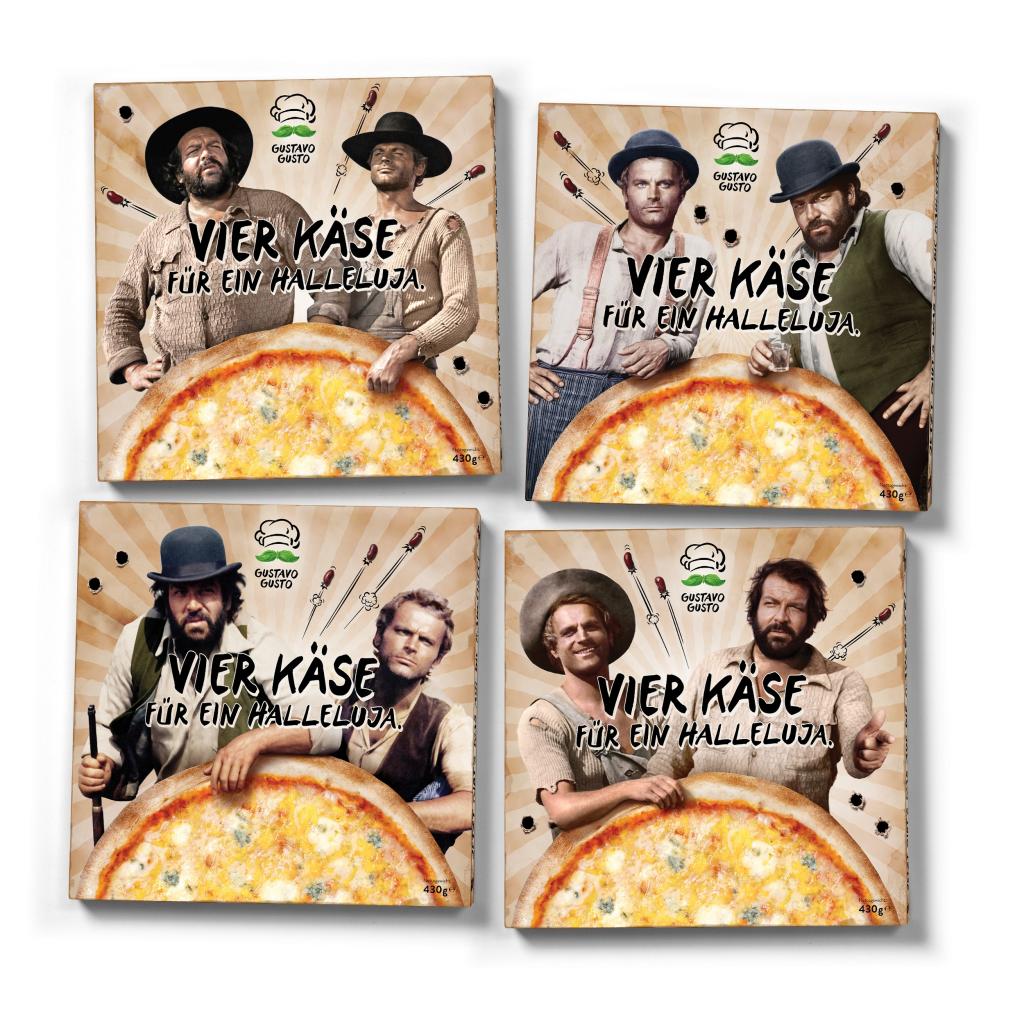 Geiselgasteig - Bavaria Sonor Licensing (BSL) once again connects the brands "Bud Spencer" and "Terence Hill" with the food industry. After the whisky "Bud Spencer - The Legend" was just launched, now it also has a spot in the freezer: With four different visual motifs, the legendary cult actors Bud Spencer and Terence Hill are the inspiration for the new Gustavo Gusto frozen pizza under the slogan "4 Käse für ein Halleluja".

"Watching a Bud Spencer & Terence Hill movie with a Bud Spencer & Terence Hill pizza by Franco Fresco as the culinary accompaniment, a cinema evening at home couldn't be any funnier or more delicious", says Ivica Maracic, Licensing & Sales Director of BSL. "We are very pleased to have won Franco Fresco as a partner that has perfectly combined the pizza, the worldwide export hit of Italian cuisine, with two Italian cult actors! "

In total there are four different photo motifs of the acting duo on the pizza boxes, which will be available in Germany from mid-November and for a limited period of four months. In accordance with its Italian patrons, the new pizza à la "Quattro Formaggi" will not only be topped with Italian-style tomato sauce and firm mozzarella, but also with blue cheese, cheddar and Bergkäse, literally "mountain cheese".

"For us this is a dream come true. Bud Spencer and Terence Hill are cult favorites. Just like our frozen pizzas", said Christoph Schramm, founder and managing director of Franco Fresco. "With our new 4 Käse für ein Halleluja pizza we continue to bring our frozen pizzas to the market. Our famous pizzas are characterized by special compositions, outstanding quality, and humorous packaging. We are sure that we have once again succeeded in producing a frozen pizza that will meet the taste of our fans and now that of Bud Spencer and Terence Hill fans. Not only on a movie night. There are a total of four different photo motifs of the actor duo on the pizza boxes. "For all fans, the four motifs on the pizza boxes represent a special and unique collector's edition," says Schramm.

Even though beans are often associated with Bud Spencer and Terence Hill, they are not on the pizza. However, they have been integrated in the form of an innovative augmented reality game. A QR code on the back of the packaging gives access to the mobile game "Beat the Beans!"

The launch of the product is accompanied by a cross-media advertising campaign. In addition to films and ads on YouTube, Facebook and Instagram, there is a media package on Kabel 1 and much more.